Student Movements of the 1960s 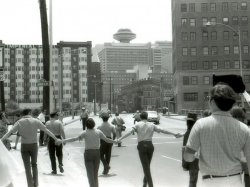 During the 1960s Georgia experienced an increase in student activism on its college campuses and in its cities. Opposed to U.S. political leadership and dissatisfied with American culture, student activists held demonstrations across the state and experimented with lifestyle changes in the hope of effecting fundamental change in American life.

The student movement, also called the New Left because it represented the latest manifestation of left-leaning political activism, gained converts on campuses across the nation throughout the decade. In Georgia several schools maintained chapters of national and regional student organizations, such as Students for a Democratic Society and the Southern Student Organizing Committee (SSOC). Georgia student leaders often looked to the national New Left for guidance and inspiration.

The civil rights movement motivated many of Georgia's New Left leaders to become involved in political activism. Emory University student Gene Guerrero, who became the first chairman of SSOC in 1964, turned to activism after being arrested at a 1963 civil rights sit-in in Atlanta. Georgia student activists who joined the civil rights and student movements routinely risked arrest and physical harm, as well as alienation from their conservative friends and families.

The University of Georgia (UGA) in Athens possessed a dedicated community of activists during the 1960s. In April 1968 students conducted a three-day sit-in at the Academic Building to protest the unequal treatment of female students. (The dress code and curfew rules were stricter for women than for men, and women, unlike men, were banned from living off campus and from drinking.) In the wake of the killing of four students by National Guardsmen at Kent State University in Ohio in May 1970, 3, 000 students demonstrated on the UGA campus, leading the Board of Regents to close all schools in the University System of Georgia for two days. UGA did not escape the growing commitment to violence that characterized the national New Left in the late 1960s. On five separate occasions from 1968 to 1972, student activists attempted unsuccessfully to burn down the military building on campus.

The growing sentiment among Americans against the Vietnam War (1964-73) generated numerous protests in Georgia. The largest antiwar demonstrations occurred during the fall of 1969, as part of the national "moratorium" campaign. In October and again in November, thousands of students gathered on campuses across the state to remember those killed in Southeast Asia. In the late 1960s and early 1970s, Atlanta witnessed many antiwar demonstrations, most of which followed a route down Peachtree Street to Piedmont Park.

@Saadia Zakai: My mom subs at a middle school and her students didn't know what an encyclopedia was. They thought it was a kind of a dinosaur 😂 Sat, 13 June 2015 03:39 AM