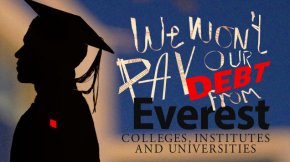 They call it a debt revolt. Hundreds of students who got loans to pay for degrees through online schools like Everest, owned by Corinthian Colleges, are refusing to pay them back. They argue that Corinthian lied about how many of their graduates landed jobs, and are asking the U.S. Education Department to forgive their loans.

Already, Corinthian is in hot water with the Education Department, which forced the company to sell off many of its colleges last year., Tamar Lewin explains the backstory:

Founded in 1995, Corinthian bought more than a dozen struggling vocational colleges, and by 2010 enrolled more than 110, 000 students online and at 100 Everest, Heald and WyoTech campuses nationwide. But it has long come under fire from federal and state regulators, with a host of investigations and lawsuits charging falsified placement rates, deceptive marketing and predatory recruiting — targeting the most vulnerable low-income students.

The Education Department forced it to sell most of its campuses last year, and on April 26 its last campuses closed, leaving 16, 000 students, most of them in California, in the lurch. Also last month, the department fined Corinthian $30 million for 947 misrepresentations of placement rates, findings that Corinthian disputed.

Basically, these online colleges fraudulently told students that they would offer personalized help to get them jobs after graduation, and also lied about how many of their students actually graduated. Students who did actually complete their degrees discovered that the “help” they got finding jobs amounted to nothing more than access to Craigslist job postings — and interviews for jobs that weren’t in any way related to what they had studied.

Many of these students owe more than $80, 000. And now they have joined a growing movement, spearheaded by a group called the Debt Collective. The Debt Collective is asking that the Education Department, which regulates student loans, forgive the students’ debt. But their mission is a larger one of reform when it comes to student loans.

At this point the department is primarily a debt collector, but it’s supposed to protect students from predatory colleges while simultaneously making money as a mass issuer of loans. So the department first makes the loans that lets students go to these fraudulent for-profit colleges, and then when the students can’t pay back the loans, the department goes after them.

The Debt Collective’s legal argument rests in part on an interesting interpretation of the so-called lemon laws, which allow people to collectively ask for refunds on defective goods sold to them fraudulently (such as shoddy cars). Under lemon laws, you don’t have to prove injury to be awarded legal relief — you just have to show that you were sold something that was already broken.

Giving Students Online Access to Their Education at The ...

@HodgesMary: The students that steal study online are no stranger to over and above a popular idol: oRHN Sun, 21 June 2015 10:18 AM