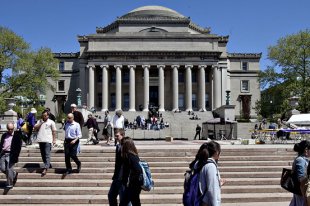 Columbia University Law School is allowing its students to reschedule their exams if they feel traumatized by the recent grand jury decisions in the Eric Garner and Michael Brown cases.

“The grand juries’ determinations to return non-indictments in the Michael Brown and Eric Garner cases have shaken the faith of some in the integrity of the grand jury system and in the law more generally, ” Mr. Scott’s letter said. “For some law students, particularly, though not only, students of color, this chain of events is all the more profound as it threatens to undermine a sense that the law is a fundamental pillar of society designed to protect fairness, due process and equality.”

As a result, “students who feel that their performance on examinations will be sufficiently impaired due to the effects of these recent events may petition [head of registration services] Dean Alice Rigas to have an examination rescheduled, ” he wrote.

The school informed students of the policy amid protests in the city and other urban areas across America over the decisions by grand juries in New York City and Missouri not to indict white police officers involved in the deaths of two black men. The legal developments struck a nerve on the Ivy League campus located blocks away from Harlem. A number of Columbia students have joined the demonstrations. according to student newspaper reports.

Mr. Scott said the option to postpone a test was “in accordance” with the school’s existing examination policies. The school typically allows students to reschedule an exam because of an illness, religious observance, a death in the family, or other exceptional circumstances.

Mr. Scott said in the email that the school has also arranged for a “trauma specialist” to come by the Manhattan campus this week to meet with any students in need of counseling. And several faculty members are holding special office hours for students “to talk about the implications of the Brown and Garner non-indictments, ” he said.

Another letter that went out to law students on Monday — this one from the school’s vice dean for curriculum — recommended that they try to talk through their concerns before asking to push back an exam.

“Unless time pressure is severe, meeting with an academic counselor is the preferred alternative, in case our student services staff can offer support or other resources that may be helpful, ” wrote the curriculum dean, Avery Katz, who said an extension request must include an “individual explanation” for why it’s necessary.

Columbia law professor Eben Moglen told Law Blog that the accommodation may be unusual but is understandable, saying the grand jury decisions raise questions about law enforcement, civil rights and equal treatment in America that have a particular impact in a law school.

@121老师 Glyzel: i would say I am studying medicine but at the same time I teach English Language in high school students and currently teaching online wiw Sun, 21 June 2015 01:45 PM

RT @KingSawdick: I see on the news all time these teachers having sex with their students, then I come to my school &these teachers don't e… Sun, 21 June 2015 01:43 PM