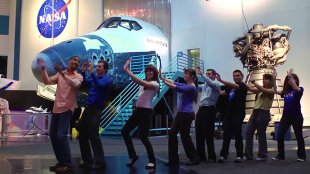 A group of NASA interns are on their way to becoming internet sensations after releasing a video called ‘All About that Space.’ The song is a parody of Meghan Trainor’s smash hit ‘All About that Bass.’

Being an intern can be frustrating. At the end of a stint, one’s tea and coffee making skills will have drastically improved. However, the ability to get hands-on experience is often lacking. A group of interns at NASA may have made a career for themselves in the music business if they do not make it in the space industry, after they released their song.

The NASA students may be some distance short of Trainor’s 375 million plus views for ‘All About That Bass’ on YouTube, but the guys are proving to be an internet hit of their own. They are rapidly approaching the one million mark, just over a day after it hit the popular video sharing site. 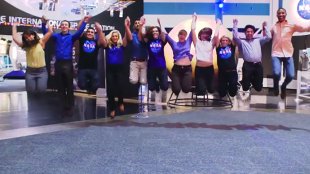 The clip features the NASA interns, who have all learned a dance move making their way around the Johnson Space Center in Houston, Texas. Stunning visuals from outer space were also edited into the video for added effect.

The parody was written by Sarah Schlieder in commemoration of the Orion space craft. The craft is built to ‘boldly go’ further into space than humans have ever gone before.

“Orion will serve as the exploration vehicle that will carry the crew to space, provide emergency abort capability, sustain the crew, and provide safe re-entry from deep space return velocities, ” a post on the song’s YouTube page stated.

That's all you need to know about this film, just watch this space for updates. thank you ok thats all bye

Here is a sample of some of the lyrics:

I see Orion crew workin’ that ship nonstop,
We know we goin' far.
Now put that LAS on top,
If you got boosters boosters, just raise 'em up.