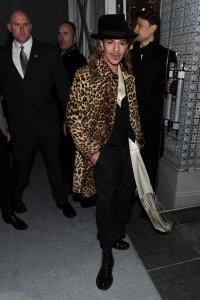 “They have that fun ad where idiots in ill-fitting khakis swing dance, so we kind of forgot all about it, ” the HBO host says

He then laid out a string of incidents involving Gap, one of the nation’s largest clothing retailers. Over the past twenty years, the company has been cited numerous times for manufacturing its products in factories with unsafe working conditions that employed children as young as 12.

“Besides, they have that fun ad where idiots in ill-fitting khakis swing dance, so we kind of forgot all about it, ” Oliver said.

Oliver then played a CBS report on a factory in Bangladesh producing clothes for Walmart. The factory had a map indicating the location of fire extinguishers, but the reporters found that most of the extinguishers were in fact missing.

“If they’re not there, then that’s not a map, ” Oliver said. “It’s an inspirational poster for fire safety.”

When asked how Walmart approved the working conditions, the manager said that they had not. His factory had been subcontracted to complete a Walmart order by another factory that had Walmart approval.

Oliver closed the segment with a message to the owners of H&M, Walmart, Gap, Joe Fresh and The Children’s Place. Oliver bought lunch for the top executive of each company, buying the cheapest food he could find.

“I do have strict policies in place, ” he said. “I told them not to spit on that food or to rub their balls on that food.”

He then held a mock fashion show, in which models wearing clothing from each company walked the runway while carrying trays of cheap sushi, salmon and even a red wagon full of rotisserie chickens.