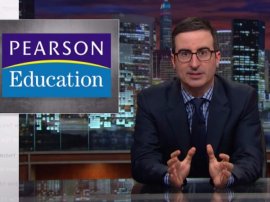 "At this point, you have to ask yourself, if standardized tests are bad for teachers and they're bad for kids, who exactly are they good for?" Oliver said.

The answer, Oliver suggests, is they're good for companies that run the tests, the largest of which is Pearson Education. In 2012, Oliver notes, Pearson controlled nearly 40% of the testing market.

With its market share, Pearson has "a shocking amount of influence over America's schools, " Oliver argues.

"A hypothetical girl could take Pearson tests from kindergarten through at least eighth grade — tests by the way that she studied for using Pearson curriculum and textbooks, taught to her by teachers who are certified by their own Pearson test, " he explains. "If she eventually got sick of Pearson and dropped out, well, she'd have to take the GED, which is now — guess what — also a Pearson test."

Due to its massive presence, Pearson "has enjoyed spectacular growth and profit, " according to Oliver, although its track record "is littered with complaints concerning technical glitches, slow grading, and even the content of their tests."

Our number one priority is always the fairness, accuracy and validity of our tests. When mistakes happen, we take immediate action to address them and analyze what went wrong so it doesn't happen again. We are also continuously working with the education community to create better assessments and provide better feedback. Our experts work closely with teachers and education professionals as we research, design and deliver high quality products and services so that we can fulfill our mission to serve learners and help people make progress in their lives.