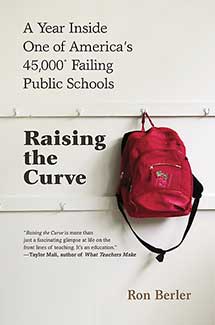 Brookside Elementary School in Norwalk, Conn., was just one of thousands of American public schools classified as failing during the 2010-2011 school year, according to standardized test scores. In "Raising the Curve: A Year Inside One of America's 45, 000* Failing Public Schools, " Ron Berler, a journalist who has written for The New York Times and Chicago Tribune, documents the year he spent observing students and educators at Brookside as they struggled to meet the demands of No Child Left Behind.

Berler recently spoke to U.S. News about what he sees as problems with standardized testing, the lack of school readiness in the youngest students, and the role he says parents should play in their children's academic success. Excerpts:

That's a scary number. When [Secretary of Education] Arne Duncan came out [in 2011] and said that it was possible that 82 percent of U.S. schools could be failing by the end of 2012, I had to scratch my head. Are our schools that bad? What are we testing, and how are we doing it? What I think is that we're doing way too much of this testing, and it is changing the way in which we educate our children. So, in a lot of ways that are obvious, and a lot that are not obvious at all, the testing colors everything in a school like Brookside.

Is testing a fair measure of a school's quality?

Suppose you are a fifth grader and you walk into class at the beginning of the year reading at a high-second-grade level, and, sadly, that is not all that uncommon. Now that teacher carries you up to a mid-fourth-grade level. That's like a year-and-two-thirds jump in a year. Because [the Connecticut Mastery Test] tests fifth-grade levels, that kid got no credit for that advancement. Nor did the teacher, nor did the school. That school did a tremendous job, but they get nothing to show for it. On paper, idealistically, No Child Left Behind was a wonderful thought, but it wasn't put out there with any practical thought.

@Meetasengupta Wouldn't it b a better idea to scrap all the entrance exams post +2?Let there be a uniform syllabus, standardized assessments Mon, 15 June 2015 01:41 PM