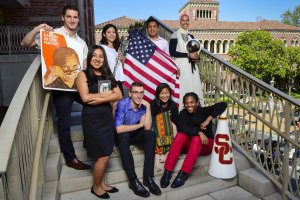 The most prolific among the USC’s Class of 2015 were honored at the Student Recognition Ceremony in Bovard Auditorium on Thursday, May 14.

Those distinguished graduates are listed below.

Order of the Laurel and the Palm is the highest honor for outstanding scholarship and leadership bestowed by the Division of Student Affairs and one unknown to its recipients prior to the event.