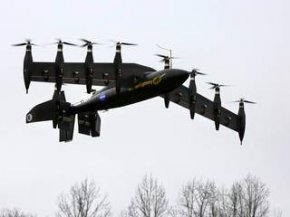 NASA has been grabbing headlines recently with their potentially game-changing emDrive propulsion system. The emDrive has generated a lot of discussion, and a lot of controversy too. But NASA has a lot more going on than futuristic space travel designs, and one recent test flight showed that the minds at NASA are still working on innovative designs for flight systems that operate in Earth’s atmosphere.

The Greased Lightning 10, or GL10, is a remotely piloted, ten engine aircraft that can take off and land vertically, and then rotate its wings for forward flight. This type of system has been developed before in full size, piloted aircraft like the V22 Osprey, but it’s never been done before in a small, remotely-piloted aircraft.
Switching from vertical flight to forward flight is a complicated maneuver, and the aerodynamic challenges for vehicles like these are substantial. As a result, there’ve been some hard landings during the testing phase. But the NASA team, including aerospace engineer Bill Fredericks, have had more success in recent tests. “During the flight tests we successfully transitioned from hover to wing-borne flight, like a conventional airplane, then back to hover again, ” said Fredericks. “So far we have done this on five flights. Now we’re working on our second goal — to demonstrate that this concept is four times more aerodynamically efficient in cruise than a helicopter.”

The forward wing of the GL10, with eight engines on it, rotates as one unit. The tail section, with two engines mounted on it, also rotates as one unit. This gives the GL10 the much sought after ability to take off and land vertically, and to hover. For forward flight, it rotates its wings so the propellers and wings are facing forward, which isa much more efficient way for an aircraft to cruise. (Watch a video of the GL10 in flight.)

The current prototype has a ten foot wing-span and a take-off weight of 62 lbs. But NASA’s goal is to develop a UAV that is much larger, and could even carry a crew. The GL10 was designed with a few uses in mind. “It could be used for small package delivery or vertical take-off and landing, long endurance surveillance for agriculture, mapping and other applications”, said Fredericks. “A scaled up version— much larger than what we are testing now—and would make also a great one to four person size personal air vehicle.”

There have been 12 prototypes of the GL10 so far. The first was a simple foam model that weighed five pounds. The current GL10 is a high quality, carbon fiber model weighing 55 pounds, and was built by NASA’s expert technicians. “Each prototype helped us answer technical questions while keeping costs down. We did lose some of the early prototypes to ‘hard landings’ as we learned how to configure the flight control system. But we discovered something from each loss and were able to keep moving forward, ” said aerospace engineer David North.