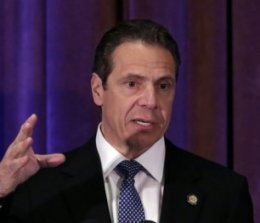 Gov. Andrew Cuomo was questioned earlier Friday about news that school districts are likely to request in implementing the new teacher evaluation program he inserted in this year’s budget. He stressed that the tests used in the evaluations don’t affect the students grades.

“The grades are meaningless to the students, ” Cuomo said in a brief press gaggle following an Association for a Better New York breakfast event in New York City.

The tests, given in grades 3-8 in English and math, are used to evaluate how effective a teacher is. Scores from a given teacher’s class can be compared at the start and end of a school year to see how much the kids have learned.

The idea has enraged teachers, and it has sparked a growing boycott with parents saying that their kids are being stressed out by the exams.

Cuomo said he believes they haven’t done a good job of publicizing the fact that the tests, for at least the next five years, won’t count at all for the students.

“They can opt out if they want to, but on the other hand if the child takes the test, it’s practice and the score doesn’t count, ” Cuomo said.

The governor also stressed that the delay requests are supposed to be granted in the event of hardships although those in the education industry say lots of schools are likely to seek the year-long delay, given the tight frame for getting the new plan up and running.

Schools are supposed to have the new evaluation systems by September, but they can seek a one-year extension into 2016.

@CustomerSpecs I disagree. You shouldn't punish the kids who are involved in sports and force them to pay for their own drug tests. Thu, 18 June 2015 07:13 PM