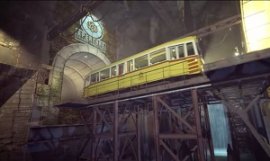 It looks like Valve isn't hurrying to make a new Portal game, but an upcoming unofficial Portal 2 mod may be the next best thing.

The mod's filesize is too large for Steam Workshop - hence its individual release.

Portal Stories: Mel is a free, story-based add-on featuring more than 20 new maps and a fresh narrative. All you need to play it is a copy of Portal 2.

Mel stars a new protagonist (yes, that would be Mel) and a new personality core in a story that explores the early years of Aperture Science.

Players will wake up years later after a short-term sleep experiment goes awry. You'll have to work out what went wrong while attempting to escape.

The blonde-haired Mel was originally designed to be the main protagonist of Portal 2 before being cut in favour of a return for Portal 1's Chell.

The character was then considered for inclusion as your co-op buddy in Portal 2's two-player campaign - before being cut for a second time in favour of android test subjects Atlas and P-Body.