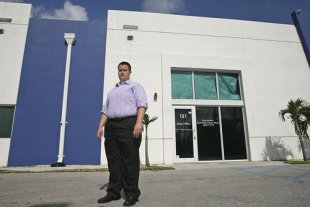 Vindicated: Rise principal Gemma Torcivia may soon have her school running once more

Three months after Rise Academy was shut down without warning, the Florida City charter school has won its appeal against the Miami-Dade School District. But that doesn't mean classes are about to start again.

As New Times reported in August, Rise Academy was the only charter closed this year despite showing more improvement than any other school in the county. Rise went from an F rating in its first year to an A in 2009-10.

"It's not often that David hits Goliath with the sling shot, " says Glen Torcivia, the lawyer representing Rise before the Florida Board of Education yesterday. "This decision means our charter was wrongfully taken away and has been reinstated immediately."

Yet Torcivia, who is also the father of principal Gemma Torcivia, isn't sure when the school will actually be able to reopen - an uncertainty he blames on the school district.

"The way Dade county carried out the termination was really calculated to make sure the school stayed closed, " he says.

According to Rise's contract with Miami-Dade, the county must continue to operate the school while the appeals process is going on. That means Rise should have been kept open pending yesterday's decision. Instead, the school was emptied just days after its teachers received notice of the closing on June 9.

School district officials told earlier this summer that they don't have any responsibility to keep open what they consider a failing school.

Miami-Dade closed the school citing alleged academic and financial failings, but refused to wait for FCAT scores to be released. Two weeks later, those test results showed Rise had improved by a combined 34 percent in math and reading, more than any other school - charter or traditional - in the entire county.

In the meantime, Rise students are scattered among other schools. Many of Rise's former teachers are unemployed, still waiting for the school - or the school district - to send them their last two paychecks.