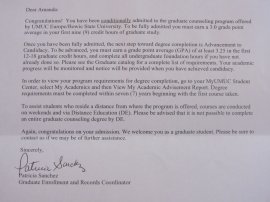 Last time I talked about grad school, I did a three-part series on places I looked for, and about UMUC-Europe, I was told I could apply early and put summer term even if I intended to apply for fall. I decided just to wait until June 4th which would have given me more time to write my personal statement anyhow, and any references would still have about two months to put in their recommendations. I had already saved the progress from when I found out I couldn’t put fall 2012 as an option yet, so I went back on June 4th to fill out the rest.

After filling out the term, I was able to pick my path. At first I was worried there was something wrong with the system as the graduate option didn’t have counseling psychology available under it. Then I realized they had separate listings. UMUC’s graduate courses were under graduate while Bowie State University’s were under Bowie State Graduate. After I submitted the application, I had the option to pay the fee then, or mail a check. I opted to do it then. The process was quick and painless. 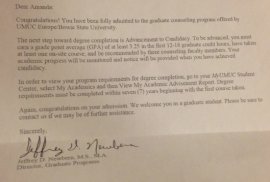 I got a message saying I would get a UMUC portal login and password within a couple days. It was actually within a couple hours. I had to log in, go to “change password”, and set one up. After that, I was able to poke around and see the different things that would be available. Later that day, I went over my personal statement a couple more times and then turned it in. I also wrote requests for references and put my transcript requests in the mail. (Technically since it was raining and my husband decided he didn’t want me to have to get wet, he put them in the mail. Isn’t he sweet?). Now all that was left to do was wait.

Surprisingly while I got other emails from UMUC, I never got an email saying when I was accepted. I just checked my account periodically to see when it showed less things in my “to do” list, and one day it didn’t show any but still showed pending a decision for the graduate school. Within a couple days I had an email about financial aid being approved, and when I logged in, they showed me as part of the graduate school in counseling psychology (although I still had to finish my foundations courses before I could be fully admitted). I could take up to three graduate classes without having those finished. I later got a letter (below) officially telling me I had been conditionally admitted.