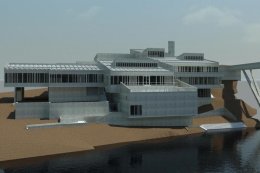 Dunelm House is the main Students Union building at Durham University. Completed in 1965, this fine example of Brutalist architecture was built under the supervision of Sir Ove Arup and is built into the bank of the River Wear. The building is now in urgent need of repair - particularly the unusual 'coffin' roof which leaks so badly that buckets have to be places around the building during heavy showers to catch the dripping rain water! The university decided to carry out a major refurbishment of the building and Bury Associates were commissioned by the project architects to survey and produce and accurate Revit Building Information Model of the building and the surrounding landscape. A topographical survey of the site was also required along with highly detailed plans, elevations and sections of the building. Dunelm House is constructed on a number of levels and the roof and external areas are quite complicated. Scanning the building to produce a Revit Building Information was considered to be the best way for the client to get a true understanding of the building.

An accurate control network was established using total station survey instruments and this was positioned onto Ordnance Survey grid and datum using a GPS receiver. 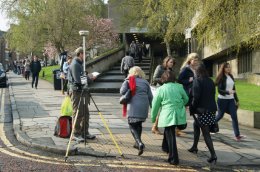 The building was laser scanned inside and out using two Faro Focus3D scanners and the scans were linked to the control network to position them correctly. Total stations were used to help complete the topographical survey of the area surrounding the building.

GPS receiver linking the survey to OS grid and level

In total the internal floor area of the building was around 5500 square and a total of 280 scans were carried were out over 4 days to capture the whole building.

Scanning outside the building

Back in the office the control network was processed and each scan registered together to form one complete point clouds of the building.

Video clip showing a fly-through of the point cloud

The point cloud was imported straight into Revit and used, along with other survey information, to create the final measured Building Information Model. As with of our projects our surveyors who carried out the site survey worked closely with our in-house Revit modellers and CAD team to produce the final high quality deliverables for the client.