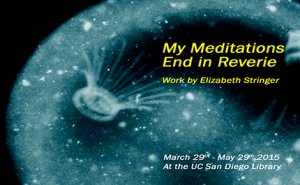 An art installation, My Meditations End in Reverie, by UC San Diego student Elizabeth Stringer is now on display through May. The exhibition is divided into two parts, located in both the Seuss Room Foyer within Geisel Library and in the Biomedical Library Building entry.

With an educational background as a double major in Human Biology and Art Studio Practice, Stringer has found herself within a world of growing rationalism in contemporary science and society. By allowing this mode of thinking to be the guide of passion, she investigates the poetic microcosm, a private world of self that is able to incorporate and convey the many facets of the world within a singular moment, which is more specifically contained within the informative lens of research.

The installation in the Seuss Room Alcove specifically observes the dialogue that occurs when both visual and scientific knowledge are categorized and cognitively mapped into an interior environment. The use of drawing becomes the meeting point of the mind and body – where the hand is corrected and edited, as each thought process it recognized and drafted. With the constant editing of this information, Stringer constructs her conception of different physiological and taxonomic systems, blurring the processed realities of the micro and macro.

In the entry to the Biomedical Library Building, the second part of the installation is a series of images of zooplankton, taken from a collaboration with the Jaffe Lab, a Scripps Oceanography zooplankton lab, involving one of the first projects with the O-Cam (a microscopic lens) here at UC San Diego. While categorizing these zooplankton -zooming in and out on the toggle- chance moments were captured where zooplankton and other matter became aesthetic foreign entities. Almost as if arriving from the depths of Stringer’s unconscious; quickly appearing, then disappearing, only to become a data point within a categorized system. By disrupting the information data flow and exalting the poetic imagery of the zooplankton, Stringer is able to maintain the integrity of the tiny creatures. The image’s ambiguity -as either a photo taken from outer space or even some other microscopic body- plays with the very nature of the poetic microcosm that is contained within the informative lens of research.

Jon Foreman - "War in my Blood" at UCSD

UCSD Gospel Choir - Since I Lay My Burden Down

@Yuri Min: before I even introduced myself, "oh wow you smart gurl goin to UCSD?" ahahahahah thanks My name is Yuri Min. #visa #USAconsulate #approved Wed, 17 June 2015 08:38 AM