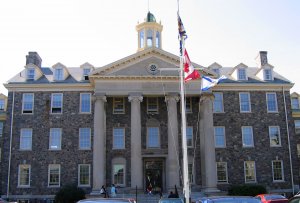 (CANADIAN UNIVERSITY PRESS) If there’s one universal truth for student journalists it’s that they don’t do it for the money. Most get small honorariums and fuel their work with a passion for the trade. But the money issue comes up a lot in the student press — someone has to pay for the ink and paper.

For The Watch at the University of King’s College, that issue is prominent. Their student union has not released the media levy the Watch is owed or work with the magazine toward a solution. As a result, the student journalists have had to forego their honorariums to keep the magazine in print.

The issue is a 15-year-old policy requiring for The Watch’s board to approve the release of the student levy. While the vote has taken placed and passed unanimously — twice — the student union is claiming it illegitimate, and questioning a new board member’s position.

The two student union members, who are also part of The Watch’s board, said they were unable to attend the meeting along with another student member. This strained the quorum needed for the vote in question along with the release of the money, requiring every other board member to be present, which they were.

The levy for the year is $12, 300, $6, 150 of which The Watch usually receives in the first part of the school year. They haven’t gotten a cent, instead using the magazine’s savings and cutting staff honorariums to keep the newsmagazine in print.

The staff did this because they believe in student journalism. It’s an important part of the media landscape, often breaking stories larger media outlets don’t have the resources to cover. The Watch, for example, has contributed to ongoing coverage of the Dalhousie Dentistry scandal. The articles have been reprinted by Canadian University Press members across Canada.

Student journalism works to keep decision-makers on their campuses accountable. Without a watchdog, some student unions or administration members could fail in keeping the best interests of students in mind. The need for accountability never goes away and student journalists are best positioned to fill that need.

A lack of funds has put The Watch in a difficult and precarious position. It is unethical and inexcusable for the student union to withhold the levy and refuse to work together with the magazine to resolve the issue. Not only is it denying the journalists hard-earned pay, if The Watch ceases publication due to a lack of funds, the students would be denied an important service.

The Shield And The Sword (Kings College London Students ...

@CaptNomNom Don't think King's College accepts Polytechnic students though.. Was interested in it too... Mon, 15 June 2015 05:38 AM

@Stannis Baeratheon: Walking to the bus near the south bank past loads of King's college/LSE students. Man, these kids are soiooooo basic. It's embarrassing. Sat, 13 June 2015 02:16 AM