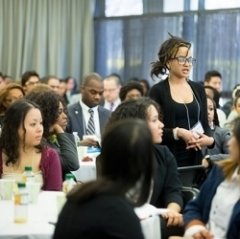 For any student, the decision to pursue a Ph.D. represents a major academic challenge and a multiyear commitment.

For students from under-represented groups, however, the challenges don’t always end at the classroom door. From combatting racial and gender preconceptions to justifying to family and friends the decision to pursue a Ph.D. rather than a professional degree, many face hurdles that can dissuade them from even applying to graduate school in the first place.

In an effort to dispel the notion that graduate school and careers in academia at elite institutions can be beyond the reach of minority students, Harvard last week co-hosted the second Ivy Plus Symposium.

With support from the president’s office and the deans of the Business School, Law School, Kennedy School of Government, and the School of Public Health, the weekend event, co-hosted with the Massachusetts Institute of Technology and co-sponsored by a group of Ivy Plus institutions, attracted 130 undergraduates and 19 program directors from across the country, and was aimed at giving them the chance to get an up-close-and-personal view of graduate student life from current Ph.D. candidates; to network with nearly 60 faculty members, including 20 Harvard faculty, alumni, and administrators; and to get to know each other.

“We and other top universities suffer from the perception that pursuing a graduate degree at our institutions is an unattainable goal, ” said Sheila Thomas, assistant dean for diversity and minority affairs, who, along with Stephanie Parsons, helped to organize the symposium. “The sponsoring institutions conceived of this symposium to break down this wall. We wanted to provide an opportunity for our faculty and the students attending to engage with each other around their scholarship.”

While increasing diversity at the graduate-school level is a national priority, the symposium is just the latest of Harvard’s efforts to attract greater numbers of minority students.

When he was appointed in 2008, then-Dean Allan M. Brandt made increasing diversity among graduate students a priority, and led the transformation of the recruitment, admission, and retention efforts at Harvard’s Graduate School of Arts and Sciences (GSAS).

Brandt was instrumental in enhancing student experiences at Harvard, through the adoption of best practices in graduate advising and mentoring, increases to the funding package offered to graduate students, and the creation of programs that help graduate students navigate a challenging academic job market.

“The recent Ivy Plus Symposium is but one example of Harvard’s ongoing efforts to assure the great diversity of our graduate programs, ” Brandt said. “We have found that diversity is essential to the excellence of our programs, which are committed to preparing the next generation of researchers and scholars, pushing the frontiers of knowledge across the globe.”

RT @andresazorrilla: Hey @Harvard, you may be ranked higher than @UNTsocial, but that doesn't mean you're better. Teach your students respe… Sun, 21 June 2015 06:32 AM

RT @businessinsider: Two Harvard students were sick of their dirty apartments, so they built a company that will do your chores for you htt… Sun, 21 June 2015 06:40 AM