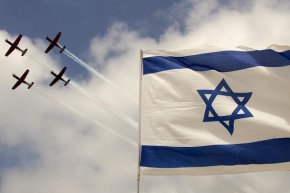 The measure unanimously passed the Illinois House of Representatives on Monday. The Illinois Senate approved it by a vote of 49-0 in April. Sponsors say they seek to counter efforts by an international pro-Palestinian campaign, known as the BDS movement (boycott, divestment and sanctions) to isolate the Jewish state.

With the expected signature of Gov. Bruce Rauner, Illinois would be the first state to legislate against BDS. In a tweet Monday shortly after the bill passed the House, Rauner wrote, “Looking forward to signing #SB1761 making IL first in the nation to fight BDS against Israel.”

The bill requires the state’s pension system to remove companies that boycott Israel from their portfolios. The measure is an amendment to existing legislation now enforced by the Illinois Investment Policy Board mandating that state pension funds be divested from foreign firms doing business in Iran, Sudan or other countries with known human rights violations.

The bill requires an Illinois investment policy board to first draw up a list of companies believed to be boycotting Israel. Those firms would then be notified that they may become subject to divestment. If a company maintains its anti-Israel policy, state pension fund investment advisers would be authorized to “sell, redeem, divest, or withdraw all direct holdings…in an orderly and fiduciarily responsible manner within 12 months.”

RT @Narainised: In other Words, A Country born out of hate for India, Pak supports #InternationalDayofYoga A Party supposedly got Indian Fr… Sun, 21 June 2015 10:05 AM

@NatsarimRemnant The first step should be to repent to TMH. Start home schooling and boycotts. Fuck marching. Sun, 21 June 2015 10:11 AM

RT @derekrootboy: Diane Abbott is being set up. If this is how Andrew Neil intends to behave, then I would suggest to Jeremy Corbyn he boyc… Sun, 21 June 2015 10:17 AM