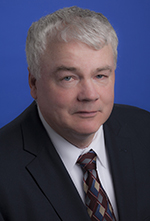 James (Jim) Cronin is vice president, Military Partnerships, for University Maryland University College (UMUC), where he has worked since he retired from the U.S. Army as a lieutenant colonel in 2000. In 1980, he earned a Bachelor of Science in Political Science from DePaul University and was commissioned as a second lieutenant in the infantry. He also received a Master of Science in Public Administration in 1999 from Central Michigan University and a graduate certificate in distance education from UMUC in 2002.

During an Army career that spanned more than 20 years, Cronin served as an infantry officer in the 8th Infantry Division (M), in Mainz, Germany; the 5th Infantry (M) at Fort Polk, Louisiana; and the XVIII Airborne Corps, at Fort Bragg, North Carolina. He commanded two infantry companies and served as a brigade executive officer. Other assignments include that of recruiting company commander and various positions in public affairs stateside in Fort Huachuca, Arizona, and overseas in Korea and Bosnia. In his final assignment, he served as director of the Public Affairs and Journalism division of the Defense Information School at Fort Meade. His military service won him the Legion of Merit and six Meritorious Service Medals from the Army.

Since 2000, Cronin has focused on expanding UMUC’s military enrollments stateside. He served for a number of years as associate vice president of program management, supervising various programs and partnerships. As program manager, he was responsible for all facets of the move into the GoArmyEd and Air Force institution portals. Cronin also developed and coordinated a number of special partnerships with military institutions, including the Army Signal Center graduate program, the Information Resource Management College, and the Army Command General Staff College. In addition, Cronin serves as associate adjunct professor at UMUC, teaching Introduction to Public Speaking.