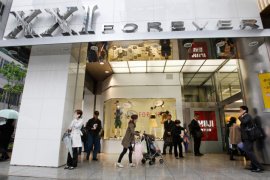 A disgruntled Forever 21 employee has caused an internet uproar by leaking a letter that indicates that the company is demoting numerous full-time non-management employees to part-time positions, which means they will no longer receive benefits.

Many believe that the letter, seen below, is Forever 21's response to the new costs the Affordable Care Act is placing on employers:

According to the letter, an unnumbered but significant amount of employees will no longer receive paid time off, will not be allowed to work more than 29.5 hours a week and will no longer have health insurance.

The company has been inundated with numerous comments on their Facebook page from angry customers who say they will never shop at Forever 21 again and who are blaming the change on aforementioned ACA requirements. The ACA has already kicked a number of companies, retail or otherwise, into overdrive with concerns about the cost of paying employees. Tangentially, Forever 21 has been part of a class-action lawsuit in which former employees alleged that they weren't paid for overtime.

The company has responded to the numerous angry comments on their Facebook page with the same statement, which denies that their choice to move employees from full to part-time has anything to do with the Affordable Care Act. It also paints the financial circumstances of the clothing chain as more grim than they previously appeared:

[Insert name here], thank you for reaching out. Forever 21, like all retailers, staffs its stores based on projected store sales, completely independent of the Affordable Care Act. After a recent evaluation, Forever 21 realigned its staffing needs to better reflect sales expectations. This realignment impacted less than 1% of all U.S. store employees. Forever 21 values all of its employees and made every effort to affect as few employees as possible in this realignment.

According to Forbes, Forever 21 has 30, 000 employees, which would mean that approximately 300 employees nation-wide are being demoted due to this change in policy. The company is worth $3.4 billion, but is privately held. They use cheap labor and knockoff designs to keep their costs down, and because of that, have managed to expand at a rapid rate. They announced plans to open their first store in Russia just last month.

@Rizal Amri Rosli: These workers at forever 21 one utama are super stupid. Stupid people aren't supposed to be hired to deal with customers. Fucking shameful Sun, 14 June 2015 08:38 AM