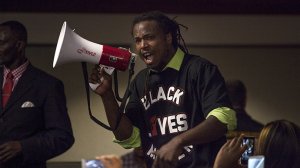 A group of anonymous multi-racial Black Lives Matter protesters took over a Forever 21 store on Union Square, New York, on Sunday to raise awareness for the number of black kids who didn’t make it past the age of 21 because they were killed by police.

The demonstrators replaced mannequins with Black Lives Matter sweatshirts and spread one of their banners across the window of the store.

The stunt was to raise awareness for the growing number of black youngsters killed by the police in the US, such as 18-year-old Michael Brown from Ferguson and 17-year old Trayvon Martin from Florida, as well as Oscar Grant, who was killed by police in 2009 and was the subject of the 2013 film Fruitvale Station.

Never 21 released a statement saying that their stunt was not an attack on the chain store Forever 21 and offered the retail conglomerate the chance to support the Black Lives Matter movement.

Forever 21 store with Tear It Up
Related Posts