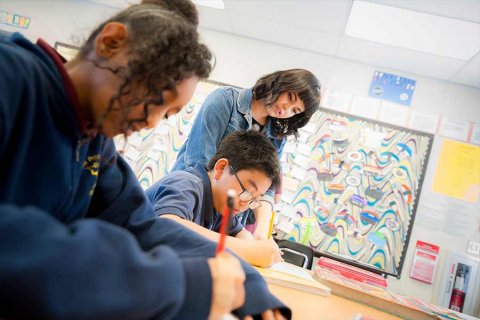 San Diego, Calif., Jan. 30, 2013 - Students who work together and interact online are more likely to be successful in their college classes, according to a study published Jan. 30 in the journal Nature Scientific Reports and co-authored by Manuel Cebrian, a computer scientist at the Jacobs School of Engineering at the University of California San Diego.

Cebrian and colleagues analyzed 80, 000 interactions between 290 students in a collaborative learning environment for college courses. The major finding was that a higher number of online interactions was usually an indicator of a higher score in the class. High achievers also were more likely to form strong connections with other students and to exchange information in more complex ways. High achievers tended to form cliques, shutting out low-performing students from their interactions. Students who found themselves shut out were not only more likely to have lower grades; they were also more likely to drop out of the class entirely.

“Elite groups of highly connected individuals formed in the first days of the course, ” said Cebrian, who also is a Senior Researcher at National ICT Australia Ltd, Australia’s Information and Communications Technology Research Centre of Excellence. “For the first time, we showed that there is a very strong correspondence between social interaction and exchange of information - a 72 percent correlation, ” he said “but almost equally interesting is the fact that these high-performing students form ‘rich-clubs’, which shield themselves from low-performing students, despite the significant efforts by these lower-ranking students to join them. The weaker students try hard to engage with the elite group intensively, but can’t. This ends up having a marked correlation with their dropout rates.”

This study co-authored by Luis M. Vaquero, based at Hewlett-Packard UK Labs, shows a way that we might better identify patterns in the classroom that can trigger early dropout alarms, allowing more time for educators to help the student and, ideally, reduce those rates through appropriate social network interventions.

Cebrian’s work is part of UC San Diego’s wider research effort at the intersection of the computer and social sciences, led by Prof. James H. Fowler, to enhance our understanding of the ways in which people share information and how this impacts areas of national significance, such as the spread of health-related or political behavior.

@diana: That awkward moment when the deadline for grades has passed and your professor hasn't imputed grades yet #UCSD #igotanA #justincase 😉 Fri, 19 June 2015 06:07 AM