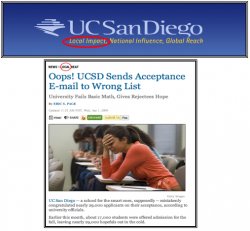 I didn’t recognize that golden-yellow semi-italic slogan, but it got me thinking. How does UCSD have a local impact, national influence, and global reach? Tritonlink would probably point first to an article on the homepage citing UCSD as the 7th best public university in the nation. Lucky us! Tritonthink had a few other incidences come to mind. Let’s tackle them one at a time:

Local Impact,
It still boggles my mind that the 7th best public university in the nation could send out false congratulatory emails to 29, 000 of applicants, encouraging rejectees to attend a welcome session. In retrospect the administration probably wouldn’t mind if this was the worst thing UCSD was known for in the recent past. Unfortunately for them, UCSD doesn’t stop at “local impact.” 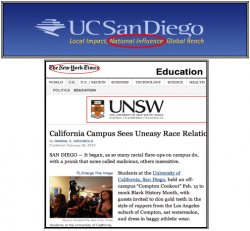 National Influence,
UCSD makes the papers all the way across the country to the New York Times when private citizens throw a private party on private property and a looped rope is absent-mindedly left in obscure corner high in the stacks of Geisel waiting to be discovered and politicized. Thus the “Compton Cookout” and “Geisel noose” which garnered national attention. But as any DOC, HILD, or ETHN professor will tell you, it’s not just about national recognition– we’re nothing if not internationally jubilant.

Global Reach
The whole is highly political, but hardly mainstream. You might say it’s unconstitutional, but you sure can’t say it isn’t “global.”

Looks like UCSD lives up to all three levels of the slogan after all. Whether that’s how it was conceived is another story.

@CustomerSpecs I disagree. You shouldn't punish the kids who are involved in sports and force them to pay for their own drug tests. Thu, 18 June 2015 07:13 PM