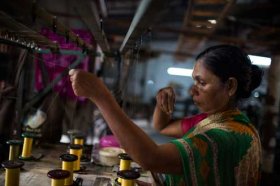 This is particularly true for women who, on the one hand have increased opportunities for economic autonomy and improved livelihoods as a result of their employment the industry, but on the other hand face the brunt of abuse perpetrated by managers and are subject to poor and often dangerous conditions in many of the factories in which they work. The dynamic between the primarily male middle managers and female garment workers often recreates the same patriarchal structure found in many family settings and within the larger society. And factory level labor unions in many parts of Asia, which are commonly thought to be the main method of representing workers’ concerns, are also often male dominated, hierarchical, and do not represent the women workers they claim to advocate for.

This is why then, despite what we hear about Bangladesh, the story of the garment sector is a more hopeful one. While changes taking place in the industry are slow and incremental, these changes have been initiated and sustained by labor groups, many of them led by women. Garment federations in Bangladesh, made up of not only registered unions, but also women’s organizations, NGOs, and development organizations, have women workers not only as members, but in leadership roles. In my book, I note that for example, “… the Awaj Foundation (established in 2005), has played an important role in advocating for worker’s rights and serving as a liaison between workers and factory owners and between workers and the government.” The Awaj Foundation was started by Nasma Akter who herself worked in the garment sector for more than twenty-five years. She has argued that, “If the factory closes down, the hardship ultimately falls on the workers …The welfare of millions of female workers and he development of our country depend on the health of the garment sector.”